The day I received the final proof copy of my book, In Search of Maria B. Hayden, M.D.: The American Medium Who Brought Spiritualism to the U.K., someone brought to my attention a photograph on Pinterest labeled “Mesmer Maria B. Hayden.” Several people have copied and reposted it, including someone on Twitter. In reaching out to those who uploaded it, I received no response. While some of the features were similar to Maria’s known photograph, several things made me doubt this was Maria’s image.

So I consulted with historical photograph expert Maureen Taylor, a.k.a. The Photo Detective. She said the Pinterest photo was taken likely between 1850 and 1855 based on hair and clothing styles. She checked some of her resources on historical photography and felt that the woman looked French, not Anglo-Canadian as Maria was. I had also felt the young woman in the photo looked French.

Another curiosity is the cross the woman wears. Maria was never a Catholic, and based on my research, she wasn’t a Christian Spiritualist. It would be out of character for her to wear a religious symbol. As her husband, William R. Hayden, pointed out when he left instructions for her headstone: “I specially request that no broken shaft or religious emblem of mourning, or scriptural inscriptions, be placed upon said headstone or monument, as they would not be in accordance with her wishes.” Maureen said it could be just a fashionable piece of jewelry, but the time period was too early for crosses to be worn for fashion. 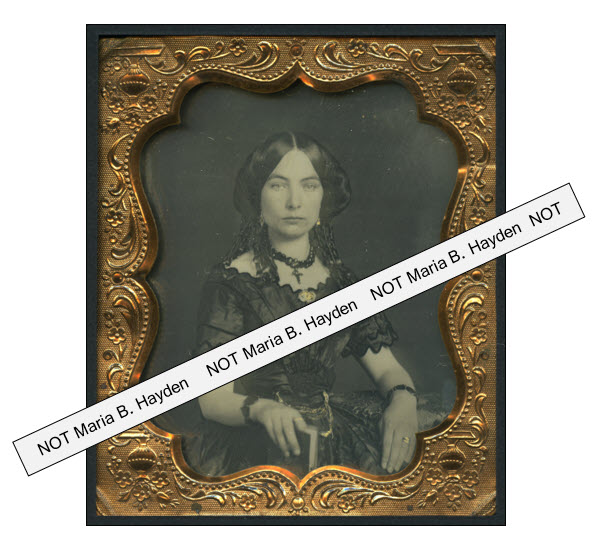 Maureen did a Google image search and found a post on Reddit labeled, “Fake Civil War Era Daguerreotype?,” which showed the Pinterest photograph. Someone commented: “Librarian and art historian checking in. I did a little digging. I was so sure it was fake because all I could find were dubious descriptions on Pinterest, but eventually I found that it’s held by the Missouri Historical Society, and it’s a daguerreotype by Thomas M Easterly.”

Maureen went to the link for the Missouri Historical Society site, and sure enough, the daguerreotype is there as an “unidentified woman” in the Thomas M. Easterly collection

She then checked a site that includes biographies of all known daguerreotypists: Craig’s Daguerreian Registry. As it turns out, Easterly and Maria were never in the same place during the early to mid-1850s. His business at that time was located in St. Louis, Missouri, a place with a large population of French immigrants.

It’s clear that this is not a photograph of Maria B. Hayden. Who knows how or why someone identified it as such on Pinterest and Twitter. But no doubt this and other misidentified images will continue to pop up online.